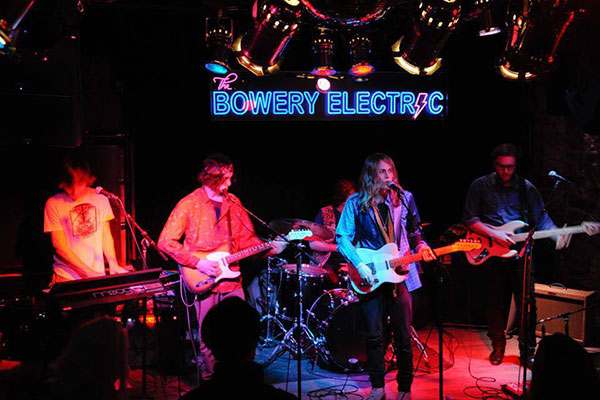 CAVERNS was founded in February of 2012 by Nicola Wincenc, Russell Holzman, Lucio Westmoreland and Nick Katz. In November 2013, prodigal keyboardist and general genius Isaac Sleator joined the band. They have spent their time, recording, and honing in on their skills live, most recently at their summer residency at NYC’s most legendary rock venue, the Bitter End, as well as other venues such as The Studio Webster Hall, The ShapeShifter Lab, The Yippee Cafe, Spike Hill, and in a special NO!R New York fashion week kickoff events. When the quintet was featured in TWELV magazine, they were described as “the insolent grandchildren of the 70s” and “little terrors (that) have a knack for toe-curling guitar lines, and heavy psychedelic grooves.” To fully understand CAVERNS, one must witness one of their sprawling forays live.
-Caverns Facebook.