Here’s this month’s awesome band
from St. Louis, MO. – Rebelle !
Find out more about them via their Facebook
Download their album on iTunes. 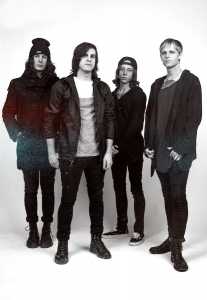 Indie rock band Rebelle have made a name for themselves in the Canadian Indie music scene under their previous moniker, The Strain. With an arsenal of well-crafted songs and festival performances under their belt, this group of young and talented musicians, hailing from the small town of Wakefield, Quebec, are poised for bigger things, surely to come.

Frontman, guitarist and principal songwriter, David Taggart, along with his sister, Rylee, on keyboard and synths, form the backbone of the band. Bassist and songwriter, Ryan Wiles, along with drummer Joey Kane, round out the 4-piece band. Their first live performance was at the famous Black Sheep Inn at the young age of 13, thanks to owner Paul Symes recognizing their budding talent.

Since then, they have gone on to win Ottawa’s coveted Live 88.5FM’s ‘Big Money Shot’, as well as performing at such festivals as North by Northeast, Canadian Music Week and Bluesfest, to name a few. Having shared the stage with such acts as Hollerado,Metric and Lorde, this young 20-something band is clear on what they want and wasting no time in getting there.

With two EPs already under their belt, R E B E L L E is now collaborating with the likes of Ryan Worsely of Echoplant Studios and Drew McTaggart of Dear Rouge